21 Savage & The Importance Of Growth

21 Savage’s growth wasn’t immediately. It happened more as a slow bleed, motivated by outside forces that he may or may not have had the opportunity to control, but that’s what life is. He named his new album I am greater than I was, so, clearly, he understands. The album isn’t only this sort of “full circle” moment for 21 Savage, it’s an act of clarity for fans, and it can even work as inspiration and motivation if you choose to let it. This is because everyone can be greater than what we were, each day ago, a week ago, five years ago– that’s the end goal, isn’t it? We never want to move backward, we never want to use the “less than” symbol when speaking of self. Even at most surface level, not digging past the album’s straightforward title, there’s something to be gleaned about the value of growth.

We are heading to dig just a little past the album title, though. 2018 has been a relatively quiet year for the 26-year old rapper. He’s no ardent tweeter, nor does he have a tendency to flood our Instagram feed with crystallized posts of his precious jewelry or all his #dawgs. His well-documented relationship with Amber Rose arrived in a halt at the top of the new year, leaving his name bereft of the media’s gossip cycle. Issa Album still left most 21 fans, if not all, with a looming question mark: where are we going? The album, while it contained a bright spot every now and then (“7 Min Freestyle, ” “Bank Account”), was above all, confusion. Looking back\, this confusion could be an immediate reflection of 21’s personal uncertainty. A simple fumbling, while he still figured out the ropes of the rap game, of what it means to be a “rapper, ” after being “a dude from the streets who started out to rap. ”

That process goes beyond finding out what music to make and who to make it with. It’s learning how to do an interview; something 21 has quite obviously improved upon. It is learning what your own boundaries are; we know, for example, not to expect certain tabloid-laden habits from a J. Cole, whereas, from a Tekashi, we eat it up. Each artist has set their own specific set of limitations for where, and how, they let fans and the media at large in. It’s learning about yourself; this is true of any new job or role you take on, and much more broadly, life in general. To set it plainly, you don’t know yourself that well at your early 20s. You may be in your early 20s right now, reading this, thinking that you do, but by the time you struck 27, that changes. 21 is in that exact situation right now, at 26-years old, he’s hitting that benchmark for growth when your perception of yourself and the world around starts to change, typically, moving into a spot that is more aware.

He talks about this on his recent interview with the Breakfast Club, the realization that his rap career is a gift, something he must take seriously, which he admits he wasn’t doing at first. “At first, I ain’t really understand what it was gunna be, ” he tells Charlamagne tha God. “But once I seen what it could, and what I could do with it, and I sat back and thought about all the shit I been through in my life, I just was like, man, I gotta do whatever I can do to just do my best with it, cause it’s like a gift, for real. ”

This realization alone could have been enough of a spark for the maturation of 21 Savage. In fact, only the process of sitting back and reflecting on life is an act in to inspire evolution. Nevertheless, there is more to the storyline. 21 blew up with Savage Mode, at the time only a couple of years deep into creating music. We noticed the raw talent, we loved it, and we weren’t wrong in so doing. The talent may have been dissuaded this way or that way since, we may have been worried for a second, but he’s made a concerted effort to look above and beyond in 2018, despite releasing a limited amount of music. His featured spots were small easter eggs that something was happening, that was their forward movement. He tried out new flows, he got weird, he got funny, he gave us ad-libs. Now, it seems like after a year of refining his craft and honing in on it by way of other people’s projects (is it less pressure that ay? ), everything has come to a head. 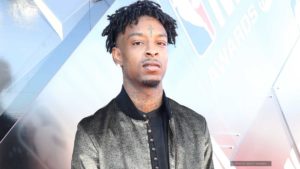 His growth is reflected in his production choices “a lot”, in his openness on wax (“letter 2 my momma”), in his unsatisfactory honesty and acknowledgment regarding self in interviews (“sometimes late nights I just cry, like a muthafucka, ” he revealed during that same insightful Breakfast Club interview.

To speak about 21’s growth, then, we want to discuss the music alongside the person. It’s hard to imagine the Savage Mode era 21 talking with Charlamagne Tha God about shedding tears to cope with his pain, or about admitting to having tried out therapy. These are almost all grown-up things, and he’s only able to share this stuff now because he is lived a little bit more: he’s had a very public relationship, he’s experienced fame, fortune, criticism and all. Lest we forget, his encounters just before “fame and fortune” weren’t sunshine and butterflies. In light of any haggered past, it’s easy to be even

more appreciative of the good things, and for 21, the good things are looking pretty damn good. He’s plainly in an appreciative spot for everything his hip-hop career has granted him thus far, even together with the learning curve and the unnecessary attention that comes with it. It’s with this mindset that 21 could create I am > I was, and make us believe it, also.